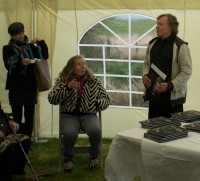 The opening of the Straw Bale Gallery took place on May 18th 2013.  IT DID NOT RAIN!  Lots of people came and enjoyed themselves.  It was also the launch of the book ‘Revealment – Datguddiad’; poems by Dai Jenkins and images of sculptures by Alison Lochhead.

My workshop is chaotic and trying to show finished work to anyone is always a difficult experience for all involved.  For a while I could show all my work outside but increasingly my sculptures are becoming more vulnerable to the ravages of the winds and lashing rains and I decided I needed a space for just showing my work, and also for me to be able to explore different ways of displaying my work and further developing the creative process of making. I decided to build a straw bale round house with a reciprocal roof.  I thought it would be a quick build and relatively cheap.  I started building it in 2007 with the idea that it would be finished by the autumn.  The weather stepped in and no small straw bales were to be found as everyone was taking advantage of the one dry day in the summer to make large bales.  I finally found some in October, but this was too late to try and build the walls as dry weather is essential to keep the straw dry. 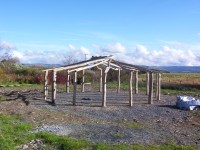 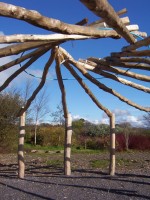 The basic structure went up in July 2007 and over wintered until building started again in June 2008.  The upright posts are oak and the roof struts are silver birch. 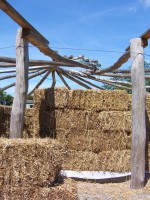 The reciprocal roof structure which went on next, casts fantastic shadows.  I needed to see how big a piece of glass was needed to enable the structure to be seen from within the building. In June building resumed, and so did the rain.  The straw bale walls went up in a day. Then the roof needed to be put on and made weather prrof.  To get to this stage took weeks, being rained off and pallets and tarpaulin constantly blowing off; but finally at the end of July the roofing felt and green roof material was put on.  The roof will be covered in sedum (rock plant) and I am slowly collecting this to start planting. 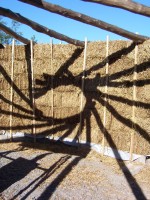 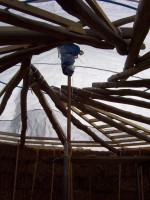 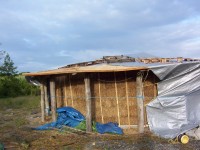 Plastering has begun, using NHL 2 lime, and days have been spent mixing and plastering.  The penultimate coat is on the inside walls and the outside walls are finished.  The ceilings are just beginning. Needless to say the whole project has taken on a life of its own and is certainly not quick, nor cheap. 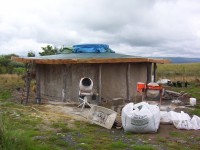 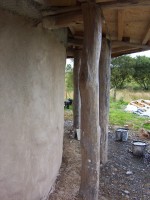 August 2009 news. Progress is being made.  The glass went in really easily in June, the stone flooring is done and plastering finished.  Lots of cleaning up now and then decisions about lighting. NEARLY THERE.  There have been many lessons learnt along the way and a few one step forward 2 steps back.  This was especially for the roof and how to safely get the water off without it soaking the plaster; this is sorted but took ages to refelt the lower part of the roof.  As it has been such a wet summer this got endlessly delayed as there had to be a run of dry, and preferably hot, weather.  Found a few days in late July.

Here are some latest photos. 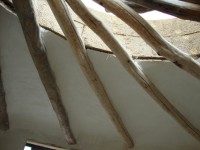 Beams being sanded back to original colour, ready to plaster to the glass. 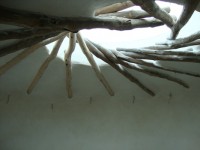 Final plastering done up to the glass

Getting ready to do the final plastering on the outside walls and overhang. 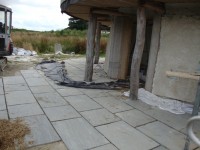 Below photographs of finished plastering. 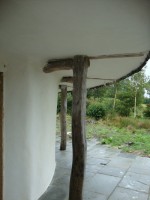 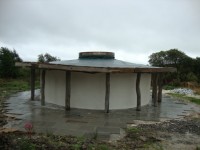 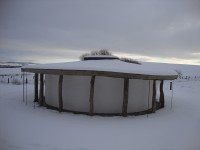 The sedum roof has been planted and is growing. The landscaping is done and grass is taking hold.  ELECTRICS are DONE!! 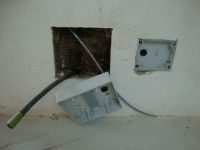 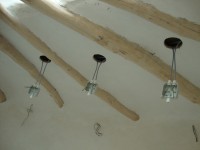 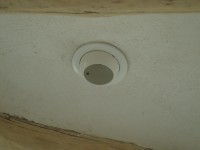 The Ceredigion Art Trail in August and September 2012 allowed sculptures to be put into the gallery and viewed by the public.  Still trying to decide on light bulbs.  I have tried about 20 different ones, but will get there!

It all looks quite weathered now.  The sedum on the roof is almost fully covering the whole roof.